Heartfelt thanks - Going the distance for heart disease

"What I was really proud of, well it wasn't really the work that I was proud of, but the amount of people that were involved in the day, just the cheering and the chanting – it was pretty cool." 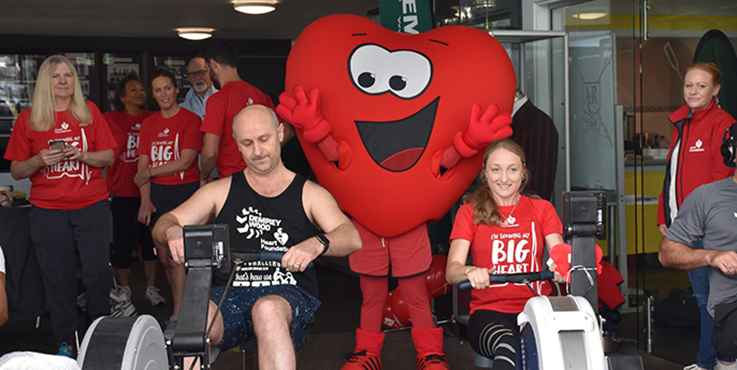 Mark Taylor is blind, can barely walk and has lost a portion of strength in his right arm, but despite this the Kiwi achieved his target, of rowing for eight hours, raising more than 100,000 dollars for the Heart Foundation.

"My family and friends have been impacted by heart disease and the health of our heart is something that we all need to take more seriously, that's why I came up with the idea of the challenge," says Mark.

In his early thirties Mark was diagnosed with Neuro Sarcoidosis, a neurological disorder affecting his mobility and vision, and on Friday 6 November he completed the rowing challenge in a custom-built rower at Auckland Rowing Club.

More than 80 people turned up to row by Mark's side on the day, and Olympic Gold Medallist Eric Murray, company Dempsey Wood, gym SMASH FIT and Auckland Rowing Club all got behind his cause.

"What I was really proud of, well it wasn't really the work that I was proud of, but the amount of people that were involved in the day, just the cheering and the chanting – it was pretty cool," says Mark.

Attempting the 100km challenge would be a big ask even for someone without Mark's physical challenges, making the achievement all the more impressive, as he relied solely on his upper body strength.

"The rule of thumb with rowing is 70 per cent leg drive and 30 per cent upper body – whereas all of my effort is coming from my upper body," he says.

"One of my biggest concerns was that my body just wouldn't last," says Mark.

But it did, and Mark's efforts to reach his 100,000 dollar target were helped out by attention from the media.

"On Thursday when we went on TV we were only up to 20,000 dollars or something, then it jumped up to around 30,000 on Friday morning, then there were lots of donations throughout the day, and the auction bumped it up big time, then a few more the next few days."

"With so many people affected by Covid-19 this year, it's amazing to have all of their support, it will be a huge help in reaching our target. We did well aye. Considering the times," says Mark.

Heart Foundation Head of Fundraising and Partnerships, Alison Wheatley-Mahon, says with this year's unprecedented circumstances, the Heart Foundation is relying more than ever on people like Mark.

"With heart disease being New Zealand's single biggest killer, it's remarkable people like Mark who help make sure that life-saving work continues to be funded. We are in awe of the effort and commitment he has put into both his training and fundraising – we couldn't do it without him," says Alison.

Heart disease is New Zealand's single biggest killer, claiming the lives of more than 6,700 New Zealanders every year – that's one person every 90 minutes.

Hold your own Heart Foundation fundraiser
Print this page

A New Zealander dies from heart disease every 90 minutes

Your donation will fund research to save lives