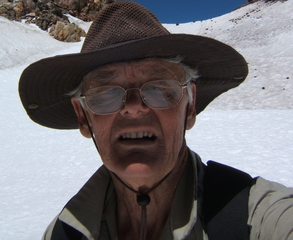 Heart trouble? Not me!

“Heart trouble? That would be ridiculous! I have been fit all my life, my heart must be as tough and good as when I was 20!” Here, Bob shares his experience of heart disease, and the symptoms that went undiagnosed.

I grew up in Africa and spent a very fit childhood life out in the bush among the wild animals, birds and other creatures. Through my adult life I climbed the length and breadth of the magnificent Drakensberg Mountains. For many years I mountain-biked in the bush through herds of wild animals and up into the hills and mountains surrounding our home. We moved to New Zealand in 2010 and a few years later I climbed Taranaki’s 2.5km vertical height. I made the peak in less than the time outlined by the Department of Conservation, while carrying all my own kit and three litres of water – I was proud of myself, it wasn’t bad for a 73 year old.

Heart trouble? That would be ridiculous! I have been fit all my life, my heart must be as tough and good as when I was 20! But by late 2014, I started taking my foot off the pedal, only ever so slightly. I used to mountain-bike a 33km round trip to the top of the Kauaeranga Valley, near Thames, then back home again. It’s a fairly rugged ride, but the worst is the 100m vertical height climb up to my house when tired from the ride. But now, that ride seemed tougher. It must be my age.

This upset me no small bit, but I had to cut my ride to only half the distance. Before long, I felt reluctant to do even this and rode less and less.

Together with cycling, I had designed and built an exercise machine, which is just about an all-in-one full gym, and I worked out regularly on it in my workshop. One afternoon in late 2015, I finished my routine, folded the machine away and went into our house a few paces away. Suddenly, exhaustion hit me, I hardly made it to a sofa and collapsed onto it, where I lay gasping and feeling a weird kind of giddiness.

I couldn’t figure out what had happened. Over this time, I’d developed a phlegmy cough that troubled me constantly. I also found I was tired and could fall asleep whenever I sat down. Doing work around the house, like mowing our grass on fairly rugged slopes, was becoming increasingly hard.

In mid-2015, I went to a GP and gave him my symptoms. Put simply, his response amounted to, “This what you can expect, you're 75!” I saw another GP, he had blood tests done and checked me over. All came back that I was in excellent health.

In February 2016, I saw a third GP who also checked me out. I had further blood tests done and, again, all came back fine, I was in excellent health despite my age.

Beside our house is a steep 100m-high peak which I climb often, the view’s stunning. In March 2016, I started to climb it, got a short way up and suddenly had this weird feeling across my shoulders in front, it was like breathing iced air that makes your lungs burn, but it was just across the top of my chest. I had to stop, couldn’t carry on. It left after a few minutes so I started climbing again, but again it happened. In all, it happened five times before I reached the peak! ...

A month before this, I'd ridden into Thames, about 8 km away, and had a bad ride back, feeling pain that forced me to stop several times.

So now, in April 2016, I decided to ride to Thames again and check what happened. The ride into Thames went poorly, but I made it with a mild, vague discomfort.

I then came riding back! I got to the top of the first small hump on leaving town. Pain forced me to dismount and I collapsed over my bike gasping for breath. That burning pain was back and worse than ever. After some minutes it eased and I was able to carry on until I came to the steep climb 0.5km from our turn-off. I reached our turn-off and collapsed over our letterbox, that burning, iced-air pain far more violent than ever.

I was too weak to stand, I was aching, semi-conscious, and gasping for breath. After quite a while, I recovered and managed to make it up that 100m-high climb to my house, but didn’t feel good.

During the ride, I monitored my pulse. At 100 beats per minute (bpm), I was sort of okay, possibly a mild chest discomfort; at 110 bpm, I was getting sore; but the violent pain came in at 120 bpm. When climbing mountains like Mt Taranaki, I've always kept my pulse between 140 and 155 bpm.

As soon as I could, I saw my GP again, it was a Tuesday, May 2016. From my description of my beats per minute, he diagnosed that I wasn’t getting sufficient oxygen to my heart. I asked what that meant. He explained there was a restricted blood flow to my heart and booked me to see a cardiologist, but warned me that though he'd ranked me as ‘serious’ there would be at least a two-month wait for an appointment. From an internet search it seemed my pains could be stable anginas, if so, I'd had at least 10 severe anginas.

The following Saturday morning, I was doing a few light things around the garden then started to feel uncomfortable generally in my chest, but my pulse was only 85bpm. I phoned my GP, but being Saturday, they were closed and I went through to an emergency number in Auckland. I described what I was experiencing.

“May I access your file?” the person there asked, I said okay and she was away for a minute. When she came back she said, “I'm phoning for an ambulance immediately and I’ll phone Thames Hospital to warn them you'll be coming.”

“I'm a cardiac nurse, you must get into hospital immediately!” she responded.

I persuaded her to let my wife drive me in as it'd be far quicker. When I arrived, a nurse did an ECG. Her response to how it looked was, “I wish my ECG was as good as yours”. I was put in an ambulance and sent to Waikato Hospital.

On the Sunday they organised for me to have a treadmill ECG done. They started the treadmill then, after just a few minutes, shut it down. I was surprised and asked if they really had enough data. They assured me they did, but only the cardiologist could interpret it. I didn’t believe this! I still didn’t know what was actually wrong with me, nor how serious it was.

On the Monday they jumped me to the top of the queue and gave me an angiogram. This showed that the top of my left main coronary artery continuing on into the left circumflex (which for me is dominant) was critically restricted from cholesterol plaque. In my case, a blockage (even a tiny blood clot) lodged here would cut blood off from 75% of my heart. Death would have been pretty much instantaneous. It was confirmed I’d had stable anginas.

After some debate over a number of factors it was agreed that a stent would be best in my case, instead of a double bypass. A single, rather large, stent was fitted on the Thursday.

And remember that referral from my GP to the cardiologist? When I arrived home on Friday, there was a letter from the hospital informing me that my case was down-ranked to ‘semi-serious’ and that I would be given an appointment in three months’ time. It seems extremely difficult to diagnose coronary heart disease and much harder to assess its severity.

For some years I had taken half an aspirin very often when going to bed as it stops platelets sticking together to form a clot. The cardiologists all agreed that this saved my life by preventing the clot forming that would have killed me.

Within three months of having the stent fitted, I was fast becoming the person I’d been. I was back in my gym, doing my rides up the Kauaeranga Valley, and climbing around the steep Coromandel slopes. It’s amazing! Gone are those feelings of exhaustion. I feel like I'm bursting with the energy I believed I'd never feel again.