“I’m running back to you”

Gary’s world came crashing down when he had a heart attack and four cardiac arrests. After getting a stent and an ICD, he’s once again surfing, riding his Harley and looking forward to the future with his family.

Life was grand. I had my wife Anita, our four daughters and two mokos (grandkids). All my life I’d been physically active, and surfing, BJJ (Brazilian Jiu Jitsu) and CrossFit were my latest passions. I was 53 years old and as fit and strong as I had ever been thanks to hard out training with the crew at Whakatāne CrossFit. But on the 27 June 2020, it all came crashing down.

I was at the gym and just finished a workout but didn't feel well, as I had a sore chest. I didn't want to bother anyone, so I drove myself to the hospital. Turns out I was having a type of heart attack often called the "widow maker" because it’s caused by a major blockage in one of the main coronary arteries.

I was thrombolysed (given medication to break down blood clots) and flown to Waikato hospital. They found a 90 per cent block in my LAD (Left Anterior Descending artery) and I had an angioplasty to put in a stent.

I made it, but six days later, at home, I suffered a cardiac arrest. My wife found me just in time and called for help. I don't recall much after this, so this part of the story is told by my wife.

Gary was very sick and the paramedics had to use a defib on him after our neighbour, a nurse, had performed CPR on him until they arrived. He was rushed to Whakatāne Hospital, and then Waikato.

The medical team at Waikato worked on him for a long time. Unfortunately, Gary had developed a bleed on the brain and required brain surgery. He had three more cardiac arrests after this. It was looking pretty grim and we were preparing the family for the worst.

Gary started to come out of his coma, nearly three weeks later, around 15 July. Our daughter Aanaliese was singing with him and he was starting to try and sing back. She asked him if he wanted to hear a song. Gary mumbled a song title that we could not understand, so he tried to write it down.

The song was Gutter Black by Hello Sailor. When the nursing staff and all the family heard the lyrics, we all burst into tears.

"I cut the cord to my mother/ She pat me on the head and said/ Go to sea boy, Get to sea man

My luck in the gutter black/ I guess I’m running back/ to you/ You in my brain /You in my heart".

I just knew he was fighting to come back.

I remember little bits from here. I know I was combative and a very difficult patient to control, I just wanted to be out. With a lot of love from my family and determination, I was discharged from Waikato hospital on the 24th of July after the doctors implanted an ICD (implantable cardioverter defibrillator), a device to restart the heart if it goes into a life-threatening heart rhythm. I came home to Whakatāne to start rehabilitation.

Over the next few weeks at home I rode a rollercoaster of emotions, mixed with poor sleep, pushing family away, and not wanting to talk about anything to do with Waikato. The nightmares and dreams were horrific and incredibly real.

With the help of my wife and my cardiac nurse, I began to understand what was happening and started to heal mentally.

Recovery is tough and you need the support of family, the cardiac nurses and counselling teams. I now live with an ICD implant, a very, very strong love for my wife Anita and family, and a great deal of hope for our future together as a family.

I strongly believe that I am alive because I was so fit and strong. Thank you to the Whakatāne CrossFit team, my neighbour, the medical teams at Whakatane and Waikato hospital, and definitely the love I have for my wife Anita, my daughters, Jessica, Nicola, Danielle and Aanaliese. I look forward to many more days with them.

My rehab process was led by Professor Des Gorman Emeritus Professor of Medicine, on this count I was extremely lucky.

He sent me to Matt Wood at AUT Millennium for physical rehab. Matt has spent about a year monitoring my heart rate during exercise and recommending training levels to improve my heart fitness.

I am now surfing again thanks to my best mate Beaver, who has been by my side since the beginning. I’m also swimming 2kms, biking, driving and best of all riding my Harley again. The physical outcome for me has been amazing.

I was also sent to Ted Clarke at Auckland Heart group. After a series of tests he gave me the go ahead to get back into training. Incredibly, as he said, I have a tiny scar on the bottom of my heart, then he turned to Anita and said, “what an amazing specimen he is!”.

Next was Dr Ralf Schnabel for a three-hour neuro-psychometric exam. That was tough. At the end of it all, I was declared to have permanent damage to my frontal lobe.

Look forward to what you want to love and achieve

I was so lucky to have had amazing care, from death’s door to now, not in the least from my wife Anita and best mate Bevan Porter.

We have many more good days than bad now and still, we never ever, ever give up.

To all those that are going through hard times, all I can say is don't look back on what has been, rather look forward to what it is you still want to love and achieve. 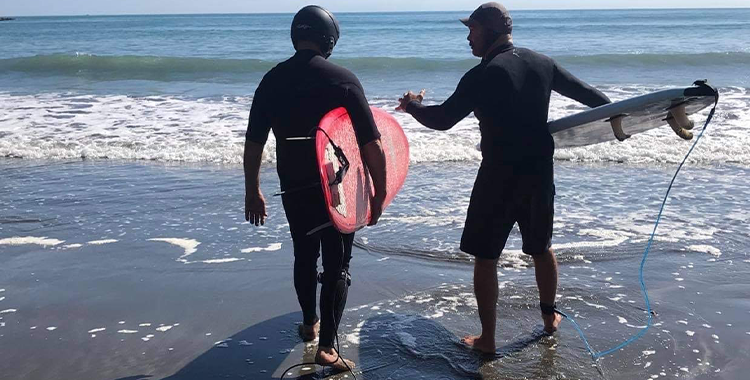