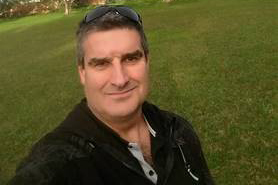 In the midst of a marriage break-up and financial worries, Bruce discovered he had atrial fibrillation. Managing his heart condition proved more challenging due to the other stresses in his life.

Bruce explains how stress and lifestyle changes impacted his AF

Bruce’s heart was broken well before it started racing. He’d separated from his wife and was still in financial debt when he was hospitalised with atrial fibrillation (AF) in May 2016.

Trouble for Bruce started when he’d lost his job some years earlier. He was out of work for nine months and after a short-lived stint in a new job, he was unemployed for a further 15 months. “I was surprised that with my diplomas and past work history that no one was employing me.”

His living expenses over all those months left Bruce in a lot of debt, and a stressful situation with one of his rental properties left him further out of pocket. Worse still, the professionals he’d relied on for financial advice also let him down. “So I lost faith in a lot of people around me.”

Bruce was frustrated and irritable and his marriage suffered as a result. Eventually, he did find the right job (which he’s in now) and that meant he could pay back some of his debts. But then came the most difficult loss of all – the break-down of his marriage of 12 years.

While grieving for his marriage and rebuilding his faith in people will take time, he says he’s a positive person and believes “life’s always preparing us for something better”.

“I could feel my heart when lying in bed, and because it’s erratic it’s a weird sound, it’s not your badoom-badoom – it’s all over the place. And you can almost hear it.”

In his case, there was so much stress in his life that he wasn’t able to properly focus on his health. Fitness fell by the wayside and, before long, there were warning signs that things were getting worse, physically.

“I put the weight on, and sweating was a clear sign for me… I do sweat a lot but this sweat was different… And I didn’t know what was going on, so I was lost… totally lost.”

Bruce thought his diet was to blame, and knew he wasn’t exercising like he used to.

“The outdoors was one of my loves and I was missing it, I wasn’t doing it. I’ve done the Ironman race twice, I’ve tramped through the jungles of Borneo, climbed pretty high mountains and done lots of caving. I love the outdoors, I feel closer to God there. I’m not religious, but it’s just the experience…”

But in the past year, walking his dog and best friend, Boss, was his main form of exercise – and for that he’d need a sweat towel with him.

There were other signs of trouble, too. Bruce’s ankles were also swelling – and just “looked weird”. He knew something wasn’t right and rang a friend who’s an ambulance officer: she explained that the swelling could have something to do with his heart; that it could be pumping out blood at a faster rate than it was returning it. “It means the body’s retaining fluid in that manner.”

So in the end, that’s what led Bruce back to the doctor – his ankles.

Bruce’s doctor referred him to a cardiologist who found that his resting heart rate was 140 beats per minute, when it should be around 70.

“Two weeks later, I had a follow-up visit with the cardiologist and he put me on the ECG again and it was 180 beats per minute. He said ‘that’s too fast – you’re at risk right now of having a heart attack’. So he sent me to hospital.”

Bruce spent five days in hospital where he was closely monitored, put on medication and lost eight kilograms in weight, simply as a result of treating the fluid retention.

He was sent back home with a “cocktail of medications”, including one for fluid retention which was stopped six months down the track.

By now, however, dizziness was a problem, and even walking up the small set of stairs inside his home would set it off. “I did actually collapse. In the middle of the night I went to the toilet, went back to bed and collapsed on the floor. And there was no one here to look after me – it was scary.

“But this little fella (Boss) came to look after me. He protects me.” If it wasn’t for his dog, Bruce says he’s not sure how he would’ve coped. The day after the fall, instead of seeing a doctor, Bruce carried on doing preparations for the bank.

Getting back some balance

Bruce knows he needs to look after himself, but says it’s not that easy when there are creditors at the door and a separation in play. “I know that I need to change some behaviours, but I need to get some things behind me first, then I can get back to me.”

Getting the exercise and sleep he needs has given way to other priorities, such as sorting out finances, working out a separation of property agreement, and going the extra mile at work and making up for the sick leave he’s taken. “So right now I can’t find a balance which is sad, because I need to find a balance.”

Other lifestyle adjustments have been easier to incorporate however, such as cutting back on salt, processed foods, butter and coffee. He’s also cut out alcohol.

”I’m drinking chai tea. I don’t drink sports drinks any more but I do buy sparkling water and put a bit of flavoured syrup in it.”

Bruce wants to lose 20 kilograms and knows he just needs to clear the decks in order to do it. “I need to have some consistent patterns in life. I want to get out and explore more – get out in the environment, get out in the land.”

“I can look after me,” he says. “I know I’m a good guy and I see a positive future ahead of me. I’m going to beat the medication and be back out there, healthier.”

He’s happy at work and is proud of the silver excellence award recently won by him and his “awesome project team”. He says he would have been lost without the support of his workmates – especially his boss – in recent months.

While grieving for his marriage and rebuilding his faith in people will take time, he says he’s a positive person and believes “life’s always preparing us for something better”.

Positive messages are scattered through Bruce’s house, such as the sign above his kitchen that says ‘Today I’m excited about everything’. A plaque in his bedroom asks, ‘How do people get on in life without their sister?’ “She’s my best support,” says Bruce.

“My heart’s happy but it’s sad,” he says. The pain and challenges of recent times have knocked him back, but he’s determined to push forward. “I know there’s a lot in my life that’s good stuff. I’ve got a good bunch of people and a great family, and I’m smart. So I can rebuild my life.”