It's a love story with a happy ending – Elizabeth and Paul O'Brien will be celebrating this Valentine's Day with the knowledge Elizabeth's heart has finally recovered.

The Wellington couple celebrated their 'dream' wedding nearly 10 years ago, but shortly after celebrating the birth of their twin girls, things took a turn for the worse.

Nothing about Elizabeth's pregnancy made her worry about her heart, or her health in general. In fact, her pregnancy couldn't have been better.

"We found out we were having twins at eight weeks which was wonderful and, apart from being a little bit tired, I had a dream pregnancy. I didn't even have any morning sickness. I had no inkling that there was something wrong with my heart. There was nothing in our family history and nothing had been going wrong."

In early 2018, during the final weeks of her third trimester, Elizabeth sometimes noticed her heart thumping quite forcefully when she was lying down. She also had slightly swollen ankles, but she assumed these were side effects of late-stage pregnancy.

"I didn't bring it up with the obstetrician, which I should have, because I just thought it was pregnancy-related." 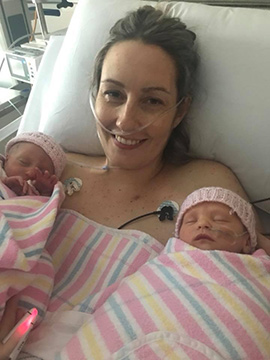 The planned caesarean birth went smoothly and it wasn't until 4am the next morning Elizabeth experienced intense pain up the side of her abdomen and breathlessness.

"It was a bit of a struggle to breathe - like you'd just run up a big flight of stairs and were trying to catch your breath with a pain shooting up your side."

Elizabeth called the nurse, and soon the room was full of clinicians trying to work out why her heart was pumping at a life-threateningly slow rate.

"I was at the back of the room, watching my wife get worked on by lots of doctors and I wasn't really sure what was happening," Paul says. "They had cardiac staff as well as obstetricians, so there were about 15 people in the room. The doctors eventually called a 'code blue' because Elizabeth's heart rate was dropping so significantly. It got down to 22 beats per minute before they took her to the ICU. It was an intense time for all of us."

Elizabeth was taken to the Intensive Care Unit (ICU) where she underwent a range of tests.

"My lung had started to collapse and fill with fluid. I was hooked up to oxygen and all sorts of monitors, they gave me chest x-rays, a CT scan to check for blood clots and an MRI of my heart and I had lots of blood tests. I was kept up all night."

The scans showed that both lower chambers of Elizabeth's heart, the right and left ventricles, were enlarged.

"The doctors did their best to understand what was going on, but in the end they put it down to possibly being postpartum cardiomyopathy – a rare kind of heart condition that occurs in the last month of pregnancy or the first six months after giving birth, but they couldn't be sure because my symptoms weren’t a classic case.

Postpartum cardiomyopathy has no obvious cause and women who develop it usually have no underlying heart problems. What's more, the prognosis is also vague. While some women recover completely, others have ongoing heart problems and require ongoing treatment.

In the two years since the event, Elizabeth's condition has impacted her everyday life.

"For over 18 months, I was on daily medication, which I was told I may have to be on for life, and I needed to be extra vigilant about all the heart healthy activities, like avoiding alcohol, removing added salt from my diet and doing regular light exercise.

I really wanted to get to the bottom of what happened to me, to make sure my health wasn't going to be severely impacted in the long term or that there wasn't anything genetic to pass on to my children.

I sought answers from four different cardiologists, two in New Zealand and two overseas, to get some perspectives on my case since it wasn't straight forward.

I had follow up tests and an MRI 18 months after the event, and to my surprise and delight, the end result was that my heart had completely healed and there was no evidence of scarring. While I did suffer a heart event, the doctors now think postpartum cardiomyopathy is an unlikely cause. I may never know what the cause was, but it is an amazing outcome for me considering the possibilities."

Every 90 minutes, one New Zealander dies of heart disease and the Heart Foundation's vital work funds research to save lives and improve the quality of life for the 180,000 New Zealanders living with heart disease.

The Heart Foundation is New Zealand's leading independent funder of heart research. Since 1968, it has funded more than $74 million in research and specialist training to help people like Elizabeth.

And she's encouraging those who’ve had a heart event to get support and make sure they get answers to all their questions.

"I think it's really important stay positive, ensure you have friends and family around to support you, and to gather all the information you need to know to help in your diagnosis and recovery."

The Heart Foundation is calling for people to show their big heart by donating to its Big Heart Appeal street collection on Friday 21 and Saturday 22 February.