Every step Charmaine Michell takes at the ASB Auckland Marathon on 28 October will be in heartfelt tribute to her late husband John, who died suddenly last year from his second heart attack, which led to cardiac arrest.

This is the second time Charmaine is competing in the half marathon as a Heart Racer, fundraising for the Heart Foundation – the first time was in 2016, alongside John and their eldest son, Layton.

The family, who have a dairy farm at Kowhitirangi, a remote West Coast settlement, first decided to become Heart Racers following John’s first heart attack and double bypass in 2015. It came as complete shock as John, then 59, was very fit and healthy. 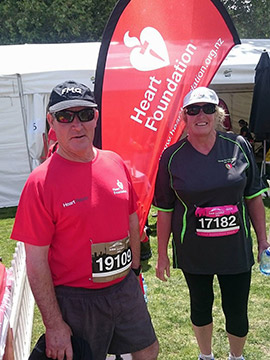 Charmaine says John was inspired to become a Heart Racer following his first heart attack in appreciation of the support given to him by the Heart Foundation, initially in the form of a ‘heart pillow’ he was given when he left hospital.

The pillows are designed to prevent post-surgery complications by supporting the sternum or breastbone, allowing patients to cough without bursting their stitches. They also help prevent pneumonia and soften the effect of a seatbelt, to make car journeys more comfortable.

Post-heart attack, John used the Heart Foundation website as a toolkit to support his recovery, and attended a Heart Foundation event about interpreting nutritional labels on food products.

Charmaine and John’s training for the 2016 half marathon consisted of scaling the hills of their 190 hectare farm, and they raised $3,500 with support from their local community. Charmaine says the half marathon was an amazing experience to share with John.

“When we got to the finish we were absolutely shattered, then we went to the Heart Foundation tent and got a massage, it was really cool finishing it. What blew us away was there was a group of people with a big banner with our names on, it was like, ‘Oh my God, someone knows our name’ – the Heart Foundation must have organised that. That was probably the highlight,” says Charmaine.

The night that John died, he and Charmaine had just come in from a typical day’s work on the farm. They had tea and a spa, showered, and then settled in to watch the rugby.

“He went to the fridge to get a banana. When he came back, he dropped dead in front of me. I thought he had tripped and I said to him, ‘For God’s sake get up’ – I still didn’t realise. It takes half an hour for the ambulance to get out here, so I just worked on him until they came. But they said he had died before he hit the ground.”

Charmaine called her youngest son, Ayden, who was in town, and asked him to come home.

“When he saw his dad lying on the floor he just thought he was unwell. He didn’t know he had died, so that was gutting. And the dog was so upset – he laid beside John for a while. It was a huge shock.”

Charmaine says John was a loved and respected member of the local community, so his death affected the whole Kowhitirangi valley.

“It blew everyone away. His funeral was massive. Everyone said he was just the nicest person you would ever meet. He never had a nasty bone in his body. He was really just a kind, neat person.”

Charmaine says losing John, her husband of 28 years, has been incredibly difficult for her, as well as for their sons – Layton, 25, Brady, 21, and Ayden, 20.

“It is hard because we did everything together. We never were apart much, because we did the farm together. Then having to watch the boys go through their own journey with this has been really hard. The oldest one is a pilot for Jetstar, and it is really sad because he just got his captain’s license and John didn’t get to see that.”

In memory of Dad

Following John’s death, Charmaine and her sons recalled how important the Heart Foundation resources and support were for John following his first heart attack. 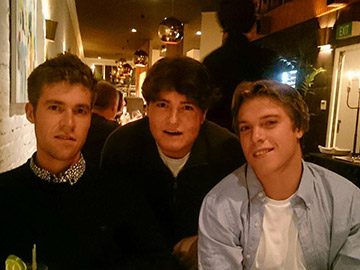 “We realised that John was always online looking at things on the Heart Foundation website, and I said to the boys, ‘Let’s do something in memory of Dad to remember him’. So this is why we are doing it.”

Their team has now expanded to 20 Heart Racers – all family and friends of John’s, a.k.a. Mystro – with their fundraising page going under the moniker ‘Mystro’s Mates’.

Charmaine says the local community has again been extremely supportive of their fundraising – they’ve nearly reached their goal and already exceeded the amount that John and Charmaine raised in 2016.

In July, they held big fundraising raffle in Hokitika, and Charmaine says they were inundated with people wanting to help.

“We have a guy who is a beautiful greenstone carver and he donated a $500 carving. We had grocery and butcher vouchers and trailer-loads of wood.”

As her and John did the first time around, Charmaine has again encouraged their livestock customers to support their fundraising efforts in lieu of payment.

Charmaine has decided to walk the half marathon with a friend, but says most of ‘Mystro’s Mates’ will be running in John’s memory.

"One friend, who was a friend of John’s, has never done anything like this, but he’s decided he’s going to do it. It is really out of his comfort zone.”

The whole team will be staying together at apartments on Princes Wharf and will head over to lunch at one of John’s favourite wineries on Waiheke Island the day after the marathon.

Charmaine knows crossing the finish line will be an emotional moment, especially for her and her sons, who are busy training for the marathon up and down the country.

“Oh, I think we will cry. It will be an emotional time, I think for everybody. I guess crossing the line and not having him there will be hard. But I just think – for us as a family – I think it is just one way we can remember John again.”