AF doesn’t have to dominate your life

Atrial fibrillation (AF) didn’t sneak up on Rose quietly – her first episode quite literally took her breath away. But although AF has led to further heart problems, Rose has a positive outlook and, with her condition under control, it doesn’t affect her day-to-day life. 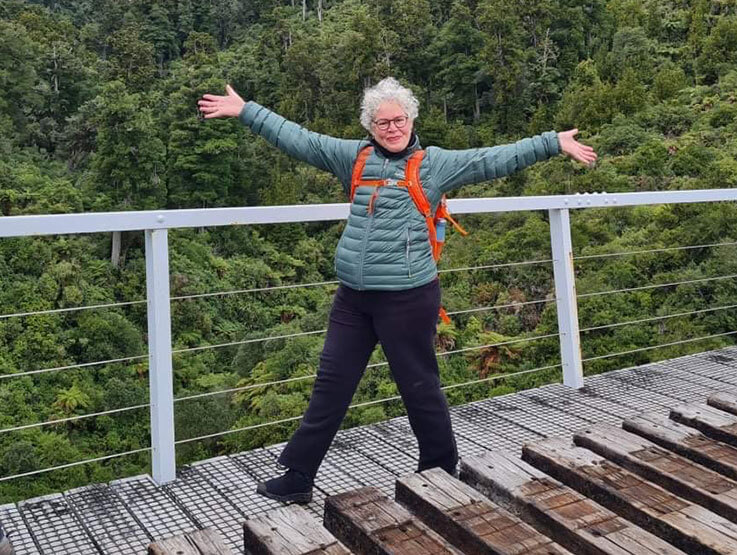 For some people, the heart rhythm condition atrial fibrillation (AF) has no symptoms at all. It’s one of the reasons it’s so important to know your pulse.

For others, however, AF symptoms can be extremely debilitating. Such was the case for Rose O’Connor who experienced her first AF episode back in 2006.

“I was at work and I remember it very clearly, I felt as though I had a caged animal thrashing around in my chest,” the 61-year-old says.

Rose, who at the time was a TV producer in Wellington, went straight to the GP. After an ECG, she was diagnosed with AF. She was then referred to a cardiologist and given medication to manage the symptoms and reduce her risk of stroke, one of the possible complications of AF.

“I didn’t really think about the risk of stroke because at that point I was more worried about how I could live with the symptoms. I couldn’t concentrate with my heart thrashing around all over the place. It wasn’t until later on that the stroke risk became more apparent.”

Getting symptoms under control

Over the next few years, Rose tried a variety of medication regimes and underwent a couple of electrical cardioversions, in an attempt to get her AF symptoms under control.

“It got to the stage where it was happening on a more regular basis,” she says. “The episodes were certainly very unsettling. It was that feeling of being very aware of the ‘chaoticness’ of my heart rhythm and rate.”

The episodes became even more frequent in 2014 when Rose was diagnosed with breast cancer and underwent a bilateral mastectomy and chemotherapy.

“It was at the point where I was in AF most of the time,” she says.

The decision was made to do a cardiac ablation, a procedure that destroys the part of the heart responsible for the abnormal beats. Unfortunately, however she suffered a mini stroke, also known as a transient ischemic attack or TIA.

“When I was in the recovery room, the nurse offered me an ice block. I went to reach out to take it from her and I couldn’t move my arm and nor, in fact, the whole left side of my body. It was really scary,” she says. “I had a number of scans and they determined it was a TIA.”

Thankfully the feeling and movement returned, but the event was traumatic and a stark reminder of the increased risk of stroke as a result of atrial fibrillation.

“I’m religious about taking all my medication,” she adds. ‘You just do everything you can, not to have a stroke.”

In 2019, Rose started to develop some other heart symptoms and was diagnosed with heart failure.

“It’s amazing how things can creep up on you. I noticed I was lurching from lamppost to lamppost down Lambton Quay, I was getting really breathless,” she recalls. “I went to the GP and was referred to the cardiologist, who did scans, and they could see I had a whole lot of fluid.”

She was immediately put on a new medication regime to manage the heart failure, and also underwent another cardioversion.

“It has taken a while to balance the regime, but I’m really pretty good now,” says Rose, who has recently moved back to her hometown Christchurch, where she’s working in her cousin’s film production company. “I’m in persistent AF but it’s not the chaotic feeling that I’ve experienced in the past. We’ve focussed on rate control and I’m feeling pretty well and pretty positive.”

“AF is an alarming thing to be diagnosed with,” Rose says. “But, in my experience, it becomes a manageable condition that you don’t have to think about all the time and doesn’t affect what you do on a day-to-day basis. It doesn’t have to dominate your life.”

The key, she believes, is finding the right treatment options and the right balance of medications.

“Treating AF is an inexact science,” she adds. “Every person’s AF is a puzzle and the cardiologists are dedicated to finding out the best regime for that person.”

Her advice for those who are recently diagnosed is to talk to others, and not to blame yourself for your condition.

“AF can be hidden, but I’ve been amazed at how many people have it, once I’ve mentioned it myself,” she says. “Talking about it helps. But you have to remember that everyone’s experience is different, it’s important to remember that.

“The heart is really complicated so it doesn’t surprise me that the electrics can go a bit haywire sometimes. But AF can happen randomly so it’s really important that you don’t blame yourself.”