Cycling enthusiast back on his bike and living with AF

Cycling enthusiast and dad of two, Jeff Graham, knows the importance of checking your pulse. 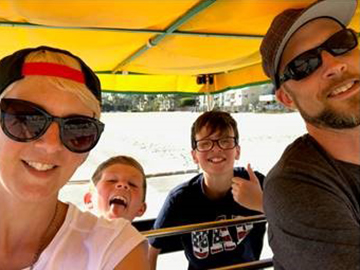 The 49-year-old Wellingtonian was diagnosed with atrial fibrillation four years ago and he's been through the struggle to get back on his bike.

Jeff regularly pushed his heart rate to its upper limits – it was unavoidable riding up the steep hills of his home town – but when he got a heart rate monitor for his training, he became aware just how high it was going.

"The first time I had a really bad episode I just put it down to having a really bad day and then forgot about it. But it started happening a little bit more often. About once a week my heart would race up to 240, 250 and wouldn't come back down unless I sat down. It would take two to three hours to finally come right."

Jeff found the episodes could be quite debilitating, particularly when it occurred during a bike ride.

"It felt awful. My arms locked up, my neck locked up, and whole body would start to get really stiff and I just felt really nauseous. Sometimes it would happen a wee way away from home, so I was trying to ride home and having to stop every couple of kilometres for my heart rate to at least come down under 200 so I could carry on again."

Atrial fibrillation is an irregular heart rhythm, which can result in an increased risk of stroke for some if left untreated.

"I probably should've gone a bit quicker. I was in denial for a little bit. Looking back, I went quite a few weeks just making excuses for what it could be, until I realised there was a bit of a pattern and that I should probably go and see someone about it."

Once the diagnosis of atrial fibrillation was confirmed, the doctor put Jeff on medication straight away. Jeff also tried cutting out possible triggers.

"Initially it was the cycling that brought it on, but then it started taking over in other parts of my life as well, football and even just with work and stuff like that. Any sort of stress or anxiety would set it off. I realised it was probably going to get worse and worse and that was a 'catch 22' situation, because the more you worried about it, that was what tended to bring it on."

"I tried all different things. I tried going off coffee, I tried going off alcohol, cutting down on sugar – all sorts of things, but nothing seemed to work. Thank goodness it wasn't coffee," he jokes. "That would’ve been terrible!"

Despite increasing dosages of medication, Jeff continued to have some episodes, so doctors decided he was a candidate for a catheter ablation – a procedure that stops the abnormal electrical signals occurring in the heart.

Jeff had his catheter ablation about four months later, which he describes as a 'bizarre' experience.

"I wouldn't say I enjoyed it, but it was not a bad experience, as far as these things go. It was a little bit surreal to think what they did, it’s amazing really."

Once over, the recovery was very quick and Jeff was soon back on his bike. What’s more he's experienced virtually no symptoms since.

"It's been brilliant. There's a chance that 15 or 20 years down the track I might have to have it done again and I'd definitely get it done, after the result I had this time."

Since receiving his diagnosis, Jeff has met many others who share his condition.

"I ended up meeting other people who I didn't know had AF until I started talking about it. That was really good too because you can share your experiences. Everyone was slightly different, but you always had a bit of common ground. There were three or four of the guys I cycle with that had it or had a friend that had it."

Jeff says that while his diagnosis shook his confidence at first, he is thankful atrial fibrillation is a condition that is manageable.

"It definitely knocked my confidence for quite a while, but I always figure too there's a lot worse things that you can get. I saw other things people were having to deal with and I thought if this is my thing then gee, I’ll take it."

The Heart Foundation is offering people in 18 locations throughout New Zealand, the chance to get free pulse checks during the week of 18-24 November 2019, as part of its atrial fibrillation awareness campaign.