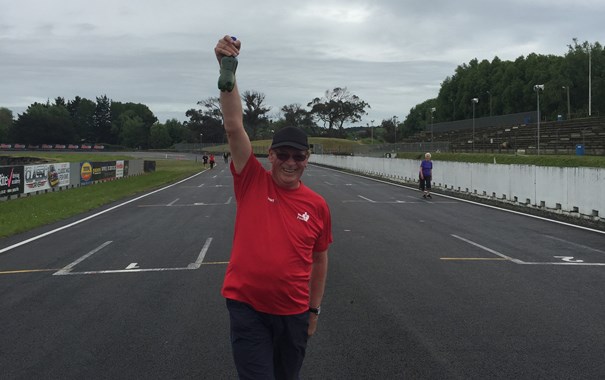 For 62-year-old Kerry, the walk was the equivalent of a healthy person’s marathon as he survived a massive heart attack three years ago.

Despite almost half his heart being scar tissue and dead muscle which is now unable to pump normally, coupled with his cardiologist’s dire prediction that he would have only a 50% chance of living five years beyond his heart attack, he was determined to complete the 9km walk.

“While it is not possibly to fix my heart I’m hoping others will benefit,” Kerry said.

“I want to raise money for the Heart Foundation to do further research into heart disease.

“The other reason that I did this walk is to give hope to others who are in a similar position, heart failure completely changes your life. I have lived three years beyond my heart attack already, every day is a bonus to me.”

Kerry was the first person to step foot onto the Manfeild motor track after its renaming to Manfeild: Circuit Chris Amon.

"I thought straight away I'm going to make Manfeild history as the first person to have an event on the Manfeild: Circuit Chris Amon. That was a bit of a fluke," Kerry said.

Each of the 3km laps he completed represents one year of survival since his heart attack.

“I chose Manfeild because I saw the 9km distance as a challenging distance for me. I wanted to do something special for the third anniversary of my survival, to give myself something worthwhile to live for.”

Hewitt said he had been training for a while and said he completed the walk well, alongside a support group of about 10 walkers.

Lives are waiting to be saved by your donation