A thirteen-year-old boy is calling on schools and workplaces to support his project which aims to reduce the number of Kiwis dying from cardiac arrest. 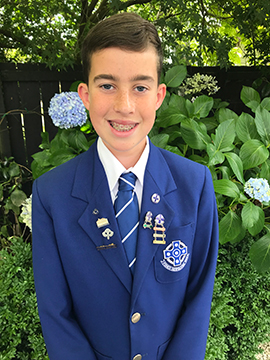 Sam Gerber was motivated to undertake the work after his uncle Greg, an elite athlete, died from a cardiac arrest during a mountain bike event in 2009.

His project aims to ensure information about community-based defibrillators (equipment used to save lives following cardiac arrest) is correct, up-to-date and widely promoted.

Automated External Defibrillators (AEDs) can be used by bystanders with little or no training until emergency services arrive. But for them to be of benefit, they need to be widely available and easily accessible.

There is a New Zealand website and app, AED Locations, which alerts people to their nearest AED. However last year, while undertaking his Gold Service Award – a charity work initiative at Saint Kentigern Boys School – Sam discovered the information on the school was incomplete.

Once he’d got his own school to update their information, he started to look at other schools in the local area.

“I found these schools hadn’t been updating their information about the location of the AEDs. So I emailed them, asking them to update it,” Sam explains.

Since September he’s got four other local schools to update their information. He’s also approached a couple of local business to do the same.

Now Sam’s hoping to increase the reach of the project to other schools and workplaces. “We’re not just going to contact schools, we’re going to get in touch with lots of different organisations,” Sam says. “My biggest hope is that someone who reads this article might think, ‘I should check my organisation to see if the information is updated. Or if they don’t have a defibrillator, to see if they can purchase one.”

Although the project began for his previous school’s charity work awards, Sam intends to continue with it on an ongoing basis.

“We’re not stopping, until there are no more organisations left,” he adds.

Professor Rob Doughty, Heart Foundation Chair of Heart Health at the University of Auckland says: “Every minute of delay reduces the chance of survival in a cardiac arrest situation, so the work that Sam has been leading is crucial and I am strongly supportive of the work that he has done”

The project has become something of a family affair, with Sam’s sister Laura, his mother Roberta and his father Ivor (a consultant cardiologist and Heart Foundation alumni) also helping out.

Roberta Gerber, Sam’s mother, said the death of her brother had impacted on all the family.

“When my brother died there weren’t any defibrillators available, but if there had been his chances of survival would have been much, much higher. It was a family epiphany of kinds. We’d always been supportive of the Heart Foundation, they’ve been fabulous support to my husband giving him a grant to study overseas and bring that knowledge back to New Zealand, but I think when it’s a personal story, it is different. The kids have seen how it impacted their aunt, their cousins, my parents and me - so that’s the driver why Sam really wanted to do this.”

This recent project isn’t the first charity work that Sam has undertaken to honour the memory of his Uncle Greg. Since 2015 he has been collecting for the Heart Foundation’s annual fundraising event, The Big Heart Appeal.