This trial was looking at the use of Evolocumab, a new class of lipid lowering medication (PCSK9 inhibitors). It is an injectable monoclonal antibody that increases LDL receptor numbers on liver cells taking LDL out of the circulation, lowering it by 60%. 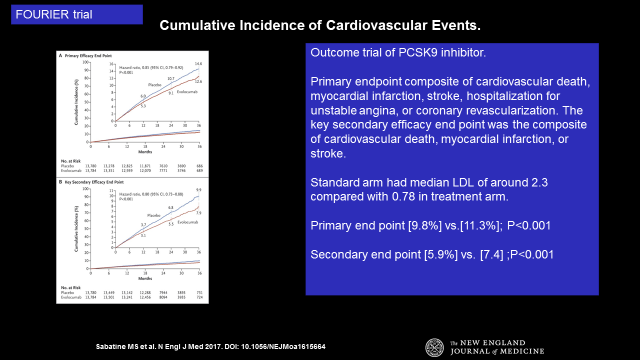 Their powerful LDL lowering effect has been understood for some time but what is new is the data regarding whether that lowering translates into lives saved and cardiovascular events avoided.

More than 27,000 people took part in the worldwide trial and after a median 2.2 years follow-up it showed that the addition of Evolocumab to current optimal care had statistically significant benefits.

There was no significant difference in adverse events including new onset diabetes, or myalgia. For those concerned about the effect of lowering LDL on cognitive function this trial had a specific subset to look at this question and showed no memory issues with lower LDL.

What does this mean for New Zealand?

It is unlikely this drug will be in widespread use anytime soon. It is currently very expensive and the discussion will now turn to cost effectiveness. Fourier showed a significant decrease in both primary and secondary composite endpoints, which are described above. The trial did not show a significant decrease in CV mortality specifically. Some argue that its follow up was not long enough to show such a benefit and there is a monitoring arm continuing to see if the benefit increases over time.

Over the last few years there has been a shift away from setting targets for treatment but this trial, in addition to the evidence from other trials such as TNT and Improve- It, may well see targets being discussed again. When it comes to LDL, it looks like the lower the better.

Join the community of primary and secondary care health professionals