Despite his second open-heart surgery four months ago, Bevan Ellis (27) is about to walk the 75km Hillary Trail to raise funds for the Heart Foundation, and show others what can be achieved with a heart condition and bucket loads of determination.

Not many people in Bevan’s life know he has a connective tissue disorder called marfan syndrome that mostly affects his heart – and that’s the way he likes it.

Some might know he had open-heart surgery aged 15, to replace a failing mitral heart valve with a pig’s valve. Or that an infection in that valve in March 2017 meant a second chest-cracking surgery in Perth, to replace it with a longer-lasting mechanical valve.

“I’ve always pushed through, I was a competitive runner at school,” explains Bevan.

“I have also been surfing since 14 and rode pretty big waves in my early 20s. Not many of the surfers knew I had a heart problem, apart from one friend, but they always noticed I would crash out in the car on the way home.

“I just feel it a bit more than a person without a heart condition. Like my brother and I will both go to work and do a 12 hour day. He’ll get home and go to the gym, I’ll get home and sleep.”

Many of those who worked 12-18 hour days alongside him on a steel platform, in 48 degree heat, loading ships for the gas and oil rigs off the coast of Karratha, Western Australia didn’t know much about it either – he worked 13 days on, one day off, to save for his 2016 OE.

Few see the everyday effects of being on beta blockers since he was four-years-old. Or the immune system crash after a bout of glandular fever at 15 following surgery, forcing him to give up a boat-building apprenticeship. Or the distress of feeling like his body was shutting down with the gradual onset of heart failure.

After the latest surgery, he contracted parvovirus on top of everything else, baffling doctors for several days while his life hung in the balance. Bevan remembers his blood pressure being 40 over 20. 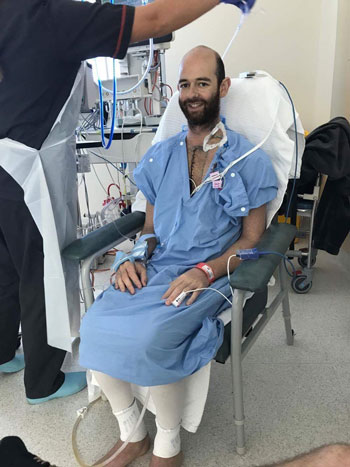 “When I first got out of hospital I would go for a little tiny walk and I would pull a muscle. After five weeks in hospital, I went from 75kg to 62kg. I have come a long way, I couldn’t do it without my physio,” he explains scrolling through fortnightly photos documenting the undeniable results.

He is now keen to show others that if you really put your mind to something, it might be a bit harder with a heart condition, but it is certainly still achievable – hence the 75km Hillary Trail in West Auckland to raise funds for the Heart Foundation with best-friend-since-five Dan Hooker, Isabella Hooker and surfing-buddy Tamati Parker.

Dan, an Ultimate Fighting Championship (UFC) fighter, flew to Perth to see his mate in hospital despite being in training for an upcoming fight.

"My fight with UFC Auckland is done, now it's Bevan’s fight so we're getting on board and backing him up," says Dan.

"He's always been there throughout my career, helping me with training and supporting me on my journey."

Bevan has been documenting his training and recovery with his the help of his support team on Facebook.

"Bevan's positive focus and drive to turn his heart health challenges into something that benefits others are very inspiring."

Keep up-to-date on our latest news, advancements in research and mouth watering recipes

Hearts fit for life, for this generation and the next