From heart attack to Ironheart

The French Riviera city of Nice is a dream holiday spot for most, but for Stephen Parun, 48, it was a beautiful backdrop for his recent Ironman success – an incredible feat, just three years after he collapsed outside a London pub, from a heart attack leading to cardiac arrest.

Back in 2015, the London-based Kiwi, rode his bike to meet some mates for a drink at a riverside pub. Stephen had been feeling off-colour for a few days – a bit dizzy, with a slight numbness in his jaw – but carried on with business as usual. As he parked his bike outside the pub, he was overwhelmed by dizziness and the next thing he remembers is waking up at St George’s Hospital. 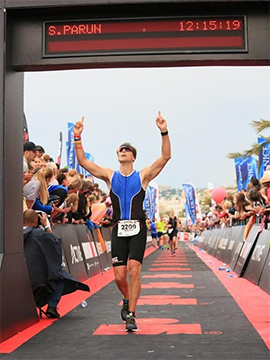 “The nurse said to me, ‘Don’t worry, you’re in safe hands. You’ve had a heart attack’. I had just awoken from an induced coma after 24 hours. I was very weak.”

A few days later, Stephen’s cardiologist described how serendipitous his survival was. His heart stopped beating for more than a quarter of an hour, but he was in the right place at the right time.

“I was very lucky, two off-duty doctors – not knowing each other – saved me. They applied CPR for 18 minutes, and I had two defibrillator shocks by the ambulance crew.”

When Stephen was admitted to the hospital, the medical team performed an angiogram and discovered that his left anterior descending coronary artery (LAD) was completely blocked, so they inserted a stent during the angioplasty, and placed him in an induced coma, to allow his body to recover.

Stephen had not had any heart issues before his heart attack and subsequent cardiac arrest, so it was a complete shock – not just to him, but to his Brazilian wife, Sandra, and their two sons, Francesco, 13, and Leonardo, 11.

“My boys were confused, but coped very well. The British Heart Foundation publish a book called 'My Dad’s Heart Attack', which shows treatments and procedures that follow a heart attack and lifestyle changes to family life, in illustration. This book gave them a better understanding of Dad’s circumstances.”

The road to recovery

As a result of the heart attack and CPR during his cardiac arrest, Stephen was barely able to move and spent 10 days recovering in hospital, assisted by nurses, a cocktail of cardiac medications, and codeine for rib pain.

Prior to discharge, he had to pass stability and memory tests. Once he was back home, Stephen attended a twice-weekly National Health Service Heart Rehabilitation Programme for eight weeks.

“Each session consisted of 30 minutes of exercises and exercise tests, plus medicine and food lectures as well as mental/emotional recovery talks with other patients. Looking back, this was really an important period of regaining my mental strength.”

Stephen says the biggest challenge in his recovery was letting go of doubts that he could get back to how his life was before his heart attack.

“To somehow overcome, that in spite of my medical condition, I could be normal and successful again. I had to think positive and move forward. It was up to myself, no one else.”

Stephen was prescribed beta blockers for the first six months of his recovery and continues to take a statin, an anti-hypertensive and aspirin every day to support his heart.

Healthy living has long been a key part of Stephen’s daily life – but came even more into focus after his heart attack.

“I would say to anyone, that a good healthy diet and exercise is beneficial not only for the body, but also for recovery if you are a heart patient like myself. Natural food is the secret for me, staying away from refined sugars, processed foods and fatty foods. Eat plenty of vegetables and fruits.”

It was only natural for Stephen to hop back on his bike – cycling has been his exercise of choice since 2007, when he discovered Richmond Park, a 12km cycling/car route through a national park in Greater London.

“I joined London Dynamo cycling club in 2009 and mainly went on club rides, some crit races and European cycling sportives – the latter involves a mimic of a Tour de France stage. I was really hooked, I travelled to the Swiss Alps, French Alps, Dolomites, Pyrenees, Rhône Alps with my bike – getting lost in the mountains, enjoying the fresh air and beautiful peaceful surroundings, the fitness challenge, and just the enjoyment of being free on the bike.”

The making of an Ironman 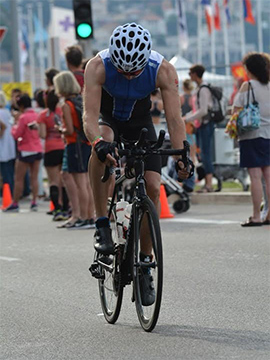 Rather than taking it easy, Stephen decided to take on the challenge of the world’s toughest one-day endurance event – the Ironman – a brutal 4km ocean swim, 185km mountain bike ride, and marathon. Stephen’s family were behind him and he was rearing to go, but he knew he needed sound medical advice to make sure his heart could cope with intensive training.

“I made an appointment with my cardiologist, Professor Sanjay Sharma of St George’s London Hospital University. Sanjay is the director of the London Marathon and was medical lead for the 2012 Olympic Games. I’m very grateful to be with one of the UK’s leading cardiologists. This gave me confidence that I could compete in an Ironman.”

As time was limited, Stephen’s training regime was “vigorous and strict”. For nine months, he swam between 1.5km and 4km, two to three times a week in a pool or lake, ran three to four times week – sometimes a half marathon or more, and cycled 250-500km every week.

“I would analyse my heart rate after every session and check my HR Zones for improvement. After a while, once you build up and get fitter – the harder you push, the lower the HR from previous weeks of training sessions – this is a good sign the heart is in good shape for exercise.”

Stephen’s heart was holding up to the intensive training, but unfortunately 10 weeks out from the Ironman he was diagnosed ankle tendinitis, and had to cut his running training down to next-to-nothing.

Despite this setback, at dawn on 24 June, Stephen lined up on the waterfront in Nice, ready for the challenge ahead.

“At the start of the race in Nice, I was very nervous, but the atmosphere was amazing! There were thousands of spectators at the swim start at 6:30am. The swim was beautiful, nice and warm Mediterranean Sea, the bike ride was through the picturesque Alpes-Maritimes close to Nice, and the run along the famous promenade beachfront.”

During the last leg of the marathon Stephen struggled, due to the pain of his ankle tendinitis, but he pushed on through – proudly wearing the New Zealand flag on his bib, cheered on by thousands of spectators and supporters.

“How I finished the run in 4hrs 18mins I’ll never know. That pain was difficult to manage and I was already exhausted by the swim and run. I finished in 12hrs and 15mins and finished in the top 40% of all athletes, so I’m very happy considering my run was over my expected time. But I’d finished! That was an amazing feeling – on one of the hardest Ironman events as well.”

For Stephen, his Ironman success is symbolic of his return to full health after his heart attack and cardiac arrest – and he believes setting this goal for himself was a key part of his recovery.

“Three years after almost losing my life and then achieving this goal, was a message that anything is possible if you have the commitment and desire. It’s up to you.”

Knowing what he knows now, Stephen advocates regular health checks for everyone – even if they’re feeling completely fit and healthy.

“If I look back, I wish I’d had regular medical checks with my local general practitioner. I couldn’t even remember when I last saw my doctor in that past 10 years. Regular checks are essential as I know now.”

Stephen was born in Wellington and grew up in Silverstream, Upper Hutt. Back in 1999, he was newlywed and working for an IT outsourcing firm in Wellington, when London-based friends urged him to try his luck in London. The lure of good IT job prospects, paired with European travel adventures on his doorstep, was strong – and he’s called London home ever since. While Stephen loves London life there are still days when his heart pines for his Kiwi homeland.

“I miss New Zealand’s natural beauty with luscious green vegetation and wild coastline, and I miss the laid back attitude of New Zealanders.”

The setting of the New Zealand Ironman at Lake Taupo is a fair rival to the French Riviera – as well as Spanish island, Lanzarote, where Stephen will compete in his next Ironman in 2019 – so perhaps it’ll tempt Stephen to test out his ‘Ironheart’ skills on home soil sometime soon!