This will enable the team, in collaboration with researchers from Ohio State University, to improve understanding of how the human sinoatrial node (SAN) works. 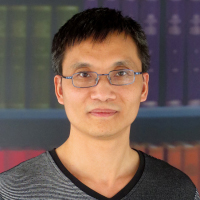 "The human sinoatrial node generates the electrical impulses that cause the heart to beat and pump blood to the rest of the body,” says Jichao.

“It is like the heart’s spark plug, and although it plays a very important role, mechanisms underlying its function in healthy and diseased states, like heart failure and atrial fibrillation, are not very well understood. This knowledge is imperative if we want to be able to treat these conditions.”

The study is being carried out on human hearts, which are taken from patients immediately after death and continue to beat for up to nine hours.

The Ohio team, led by Professor Vadim Fedorov, define the underlying causes of the node’s dysfunction at the molecular and structural level by scanning the human heart, using molecular and optical mapping techniques. However, they’re limited by experimental tools, which is where the 3D computer models of the sinoatrial node constructed by Dr Zhao’s team come in.

The models, which contain important information about the node, are a powerful tool for examining different components of the heart and investigating their individual role in any dysfunction.

As a result of this research, Jichao and his team are optimistic about better treatments for heart issues in the future. The current treatment for SAN dysfunction is an electronic pacemaker, which is not ideal as it doesn’t cure the underlying cause of the problem. Other disadvantages include a risk of infection and a need for battery replacements every 10-15 years.

“As a researcher, I am very grateful for the continuous support we have received from the Heart Foundation over these years. The Heart Foundation project grants enabled us to conduct feasible studies that were otherwise not possible to achieve,” says Dr Zhao.

Dr Zhao’s group is also supported by a previously awarded NIH grant and a Health Research Council project grant for studying AF. At present, the lifetime risk of getting AF for the New Zealand population aged 40 and above is 1 in 4.

More than 180,000 of our loved ones are living with heart disease